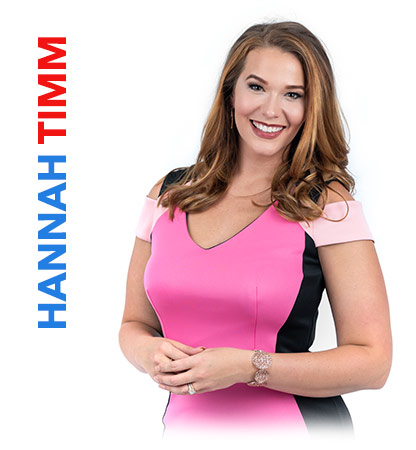 Hannah Timm is originally from Saint Marys, PA, but has called many places home - from the rolling hills of central Pennsylvania to the big city of New York, and even along the Mighty Mississippi. She holds a B.A. in Communications from Westminster College (New Wilmington, PA).

Hannah’s career in media started while working as an on-air personality for KHZtv - a Maryland-based host of online streaming stations founded by former Billboard Program Director of the Year, Bill Parris.

Hannah took a hiatus from broadcast media for a few years, as she achieved great successes on stages big and small across the country. In 2018, she made her Broadway debut in ROCKTOPIA starring Pat Monahan from “Train”, after performing in the North American tour of the same show the previous year. Hannah released her debut album “Different Stages” in 2019. She continues to sing as a guest entertainer on cruise ships and uses her gifts as soloist in church.

She excitedly returned to broadcast and joined the world of home shopping - appearing on other networks, specializing in fragrance, as well as home and beauty solutions. Hannah also worked in news, spending time as lead anchor for local news stations through the country roads of West Virginia. Hannah’s interests and endeavors are vast and varied - from being the founder of SMASH Show Co. Models, her modeling company, to being a title holder in the Miss America Organization (she was even “crowned” by Kristin Chenoweth, who once held the same title as Hannah!). She volunteers with Girls on the Run, is an in-demand adjudicator for dance, performing arts and scholarship competitions, and revitalized the Miss Lancaster County pageant after a several decade hiatus. She also held the role of Co-Producer of the Miss Pennsylvania Scholarship Pageant with the Miss America Organization.

Hannah is proud to be part of the Shop LC family, and hopes to connect with each and every one of you through our social media channels. Follow Hannah along to her travel destinations, tune in for some helpful home and beauty tips, listen to some of her music from her albums and performances, or fall in love with her adorable Pomeranian, Vivian!