Perhaps the rarest gemstone in nature, Created Bixbite provides the incredible opportunity to own your specimen of this exotic gem.

Bixbite is the name given to the red variety of beryl. Incredibly rare in nature, very few specimens of gem quality have been discovered over the years. Naturally occurring bixbite is found within rhyolite, the result of volcanic activity.

When found, this rough is often of poor quality. Due to the stone's rarity, those wanting naturally occurring red beryl have to take what they can get. In fact, the Utah Geological Survey estimates that one crystal of bixbite exists for every 150,000 diamonds of gem quality. Natural red beryl of gem-quality is typically less than a quarter-carat in size after faceting, though sizes can reach up to two carats.

Created Bixbite provides a unique opportunity for collectors to own this gemstone. By utilizing controlled conditions, created red beryl is of incredible quality compared to natural material.

The color of the gem is typically a purplish-red or raspberry color, and polished stones possess few inclusions. Red beryl receives its color primarily from the presence of manganese, but traces of iron, chromium, and calcium all contribute to the unique shades and hues found within the jewel.

A synthetic gem, bixbite created in a laboratory shares practically all chemical, optical, and physical qualities of its natural counterpart. Our bixbite is made through the hydrothermal growth process.

Hydrothermal growth is a means of creating gemstones by recreating natural processes of the Earth. By applying heat and pressure over time, stones made this way are very similar to those found in nature. Seed crystals are introduced into a solution made from the chemical components of bixbite. The seed crystals help promote the growth of the gemstones.

The time required can be lengthy. And the more time spent growing crystals results in larger stones. In most cases, the process takes from nine months up to two years, depending on the desired size of the material.

• Dr. Alfred Eppler named Bixbite in 1912. Dr. Eppler chose the name bixbite to honor the man who discovered the gem, Maynard Bixby. Bixby initially found the stone in 1904, while in Juab County, Utah. He thought that he might have discovered a new variety of beryl. At the time he found this new mineral, beryl of this color was not known. W.F. Hillebrand, a geochemist, confirmed Bixby's suspicions the following year through analysis of the material.

• Bixby had two minerals named after him. Bixbyite is the other. While bixbite continues to be the trade name in the jewelry industry, red beryl is more frequently used when referring to the mineral to prevent confusion between the two very similar names.

• Bixbyite is a black metallic mineral. It contains a mixture of iron and manganese, providing its metallic luster. Not surprisingly, it's found in association with varieties of beryl, especially red beryl.

• In addition, Maynard Bixby was a well-known mineralogist, gem trader, and collector in his time. He spent much of his life cataloging and describing the gems and minerals of Utah. He eventually published an authoritative work on the subject, A Catalogue of Utah Minerals and Localities. Bixby also authored several articles on minerals and mining within the western states.

• As with many minerals and gems, it can be common to find examples similar in appearance or composition. With bixbite, pezzottaite is one such stone. Pezzottaite is a very recent discovery. The International Mineralogical Association only recognized the mineral starting in 2003. It's named after its discoverer, Federico Pezzota.

• Similar in color and composition to red beryl, pezzottaite contains lithium and crystallizes in a distinctly different form, setting it apart. Like bixbite, it's found in only a few areas of the world. It was first discovered in Madagascar, with later deposits being identified in Afghanistan.

• While some specimens can possess the same raspberry red color, many more examples show orange-red to pink color.

• Sometimes employed as a marketing term, raspberyl can be applied to any raspberry colored beryl material. This includes both red beryl and pezzottaite. The material may also be more simply referred to as raspberry beryl.

Red beryl is only found in the United States when it occurs in nature. First discovered in Utah, it has also been reported in New Mexico. 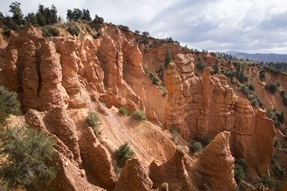 Nestled in the Pismire Knolls of the Thomas Range, Maynard's Claim was the original location of discovery for bixbite. The Thomas Range is located in Juab County, Utah. The crystals found here are small and not suitable for use in jewelry.

The Cove of Topaz Mountain is another area within the Thomas Range where red beryl is found. Of all areas within the range, crystals found here are suitable for faceting. The other rough material is too small for use in jewelry.

In Beaver County, Utah is found the Wah Wah Mountains. Bixbite in this region was first discovered in 1958. Lamar Hodges came across the mineral while prospecting for uranium.

To date, the Ruby-Violet claims have yielded the best gem-quality bixbite. The Harris family privately owns these claims, however. They are periodically worked and consistently produce material for lapidary use. They remain closed to the public without prior permission.

Within the claims, rough is mined from one of three open pits. Blasting is sometimes used to break up rock where the stone can be found. These holes can reach depths of up to 65 ft. Of the three pits on the property, the lower positioned mine has produced the most bixbite of gem-quality.

In the mid-1990's, a mining company conducted exploratory research to determine if commercial mining was feasible in the area. Finding the area suitable, they mined the area until 2001. After failing to make a scheduled payment to the family, control reverted the Harris family. They continue to own the land to this day.