Malagasy labradorite is a fascinating gemstone prized for its rainbow luster an effect dubbed labradorescence. Its metallic luminance shimmers in shades of silver violet blue-green and gold.

The gemstone labradorite was originally discovered on the Labrador Peninsula in eastern Canada around 1770. Other labradorite deposits have been found in Australia Finland India Madagascar Mexico and in the United States. Its Spectrolite variety can only be obtained from Finland.

Labradorite belongs to the plagioclase branch of the feldspar group. Its "schiller" or metallic luster can be observed when light hits the stone at an angle. Its metallic luminance called labradorescence includes violet blue green yellow and red hues. The presence of fine platelets of various materials and tiny additions of limenite rutile and magnetite produce this spectacular diffusion of light.

Malagasy labradorite has a dark smoky gray base color until light strikes the stone and reveals its beautiful rainbow colored reflection.

This gemstone can only be found in a small number of places around the world. A 2009 dig in the Malagasy area of Madagascar has revealed some of the best quality stones.

• Inuit tribes believe that the first labradorite fell from the Aurora Borealis described as an ancestral fire that was frozen in the sky.

• Crystal healers use this gem to ward off anxiety and depression. It also restores passion self-assurance and inspiration. It is believed to be beneficial to lung and respiratory health and regulates metabolism.

• Considered a power stone which enables one to separate illusion from reality when pursuing goals labradorite is said to bring out the best in people and make your work life more relaxed.

• Labradorite is considered one of the most powerful protective stones. It creates a shield around your aura and strengthens your natural energies from within.

• It is also thought to enhance mental and intuitive abilities of clairvoyance telepathy and psychic communication.

• Labradorite is believed to be a beneficial treatment for colds gout and rheumatism. It is also thought to reduce blood pressure and aid digestion. 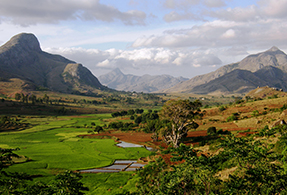 Labradorite was named after the Labrador Peninsula in eastern Canada where it was first found around 1770. However pieces of the gemstone also have been found among artifacts of the Native Americans in Maine. Other labradorite deposits have been found in Australia Finland Madagascar India Mexico and the Adirondack Mountains of the United States.

Shop LC sources Labradorite from the Malagasy region of Madagascar. These gemstones are in their natural state and no kind of treatment or additional enhancement has been applied to them.