Originating from deep outer space meteorites are truly marvelous specimens with an epic journey to Earth. Meteorite jewelry is a true celestial gift cut and shaped by master craftsmen and set in an assortment of metals to create phenomenal works of art.

A meteorite is a solid piece of celestial debris from cosmic asteroids and comets which somehow survives its impact with Earth. This solid mass travels billions of miles through space at extremely fast speeds before crashing its way to our planet. Referred to as a meteoroid prior to impact meteorites are unique rocks that come in a variety of shapes and sizes. Once it enters our atmosphere friction pressure and chemical interactions with atmospheric gases causes the meteoroid to heat up and radiate energy forming the fireballs we call shooting or falling stars.

There are two types of discovery classifications for meteorites: falls and finds. Meteorite falls are meteorites recovered after directly observing their decent to earth. All other meteorites are classified as finds.

Many ancient civilizations prized meteorite rocks and fashioned them into jewelry more than 5 000 years ago. The ancient Egyptians valued meteorite iron as highly as gold and precious gemstones. Archeologists have found meteorite bead necklaces belts bracelets and other jewelry sealed in ancient tombs dating back to 3200 BC. Evidence of meteorite artifacts found in ancient Native American graves including "the Hopewell Mounds" suggests that the cosmic gems were worshipped or played a part in religious ceremony.

• Meteorites are by far the oldest known material available on Earth.

• A stony meteorite which fell in the Alsace region of France in 1492 was thought to be a good omen for. The Holy Roman Emperor Maximillian who was warring with France and the Turks at the time.

• The Bible describes the destruction of the armies of five kings by a phenomenon very similar to a powerful meteorite rain.

• The wall of the Ka'ba a Islamic shrine in Mecca contains a black stone reported to be of meteoritic origins. It is believed that the angel Gabriel gave the stone to the Abraham who built it into his house. The stone was passed on to the prophet Mohammed who built it into the wall. The origin of this venerated relic is debable and some believe that the black stone may be impact glass from the meteor crater at Wabar about 100 kilometers from Mecca.

• A meteorite held a place of honor at the Greek temple of Apollo at Delphi--one of the most important sites in ancient Greece. It was said that Zeus had devoured four of his infant sons but when Zeus was born his mother tricked his father by giving him a stone instead of his son which he swallowed. When his father was dethroned he disgorged the stone and Zeus threw it to Earth where it landed at the temple. Many Greek and Roman temples enshrined rocks that had reportedly fallen from heaven.

Meteorites are pieces of stone that originated in outer space. Most are believed to come from the asteroid belt between Mars and Jupiter or our nearby moon. The Earth accumulates approximately 100 tons of extraterrestrial material every year. 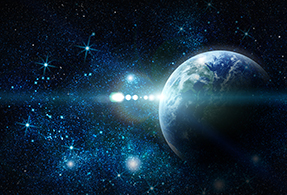