Embroiled in licking flame crimson fire opal is one of the rarest fire opals available.

Opals represent one of the most beautiful gemstones available today. While many are familiar with the traditional white or black fancy opal, and its famous play-of-color, fewer know of other opal varieties, such as fire opal. Crimson fire opals are some of the hardest to find, as few of these natural gemstones ever make the grade.

The Color of Crimson Fire Opal

A standard fire opal can exhibit a range of warm and intense colors, ranging from browns, yellows, and oranges. The most uncommon color is the intense and vibrant reds of a cherry hue. Crimson fire opal represents the finest assortment of this exciting shade. Only about one-percent of mined rough will possess this highly-coveted flame-like color. A trace amount of iron provides crimson fire opals their intense red color.

Opals are a less scratch resistant than other stones such as quartz and corundum. However, fire opal is still a viable option for jewelry. Crimson fire opal ranks 5.5 to 6.5 on the Mohs scale of hardness.

Faceting is the most common way of shaping crimson fire opal, though it’s possible to find them in cabochons. Cabochons are favored in the sporadic instances where the fire opal displays a play-of-color.

Fire opals are easy to care for, only requiring mild dishwashing soap, lukewarm water, and a soft brush for scrubbing. Simply scrub with the soap and water solution, rinse thoroughly with cool water, and dry with a soft cloth.

• Alexander von Humboldt was a Prussian naturalist who spent the years of 1799 – 1804 exploring Latin America. Around Zimapán, Mexico, Humboldt came across a large opal he had not encountered before. He took to carrying it around, and it eventually made its way back to Europe with him. Mineralogists of the time described it as fire opal. In this way, the West first knew the gemstone. The first use of fire opal traces back to 1811.

Is Crimson Fire Opal a Birthstone?

• Opal is the modern October birthstone, alongside tourmaline. Described by G.F. Kunz as a gem of autumn, it’s hard to find a more fitting stone. Crimson fire opal is a great birthstone choice, as the intense red of this stone captures the changing leaves of fall. Since 1912 opals have been a symbol for those born in October. Opal is not typically considered a birthstone before then.

• Opals don’t have a common association with the tropical zodiac.

Mexico is a leading producer of fine fire opal. The crimson fire opal sold by Shop LC is sourced from two well-regarded regions for Mexican fire opal. Jalisco and Salamanca both produce an exciting range of simmering fire opals. Our partners from these mines sought out Shop LC at the 2017 Tucson Gem Show to show us these incredible cherry red jewels. Wholesale buyers can expect to pay up to $80 per carat. However, our strong partnerships allow Shop LC to bring this stone to you at a much better value. 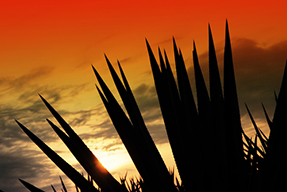 How is Crimson Fire Opal Mined?

Cherry red fire opal is one of the rarest shades to find across fire opals. Only about one-percent of rough will possess the desired color. However, during cutting, most of the rough will be lost. After faceting the stone, only five to eight-percent of the rough gemstone becomes a finished jewel. These are the gems that will be set into crimson fire opal jewelry.

• Sourced from Jalisco and Salamanca, Mexico.

• May also be known as cherry fire opal.