Regardless of design or setting London blue topaz flaunts vivid colors of intense dusty blue with inky undercurrents. Whether suspended from your ears arranged on your neck or wrapped around your finger this denim-toned topaz constantly dazzles.

Topaz is from the Greek word "topazion " which stems from the Sanskrit "tapas" meaning fire. This blazing gem has long been associated with the Egyptian island of Topazios now known as St. John's Island found in the Red Sea. While the Old Testament had biblical scriptures referring to topaz their true discovery is pre-historic and without definite dates or places. The first modern-day topaz gems were yellow crystals discovered in 1737 in Germany.

Topaz has a clear luster and perfect cleavage a quality it shares with diamond. It reveals a distinct play of colors. This transparent to translucent gemstone is a silicate mineral of aluminum and fluorine. London Blue Topaz shows the darkest tone of blue of among all topaz varieties. It owns a resolute and concentrated grayish-blue color.

London blue topaz is by nature a romantic gem and often figures in love stories as well as for honeymoon escapades. This gem signifies beauty uniqueness affluence and reveals a sense of endurance. One leading magazine "The Colored Stone " reported blue topaz as the second most popular colored gemstone in the world.

• Early Egyptians viewed topaz as the "gem of the sun " believing that the sun god Ra bestowed it with a golden glow.

• Topaz has been used as an amulet to shield one from harm.

• In the middle ages people valued topaz for its healing prowess.

• The Bible calls topaz one of the "stones of fire" and it was one of 12 gemstones placed in the foundation of the city walls of Jerusalem.

• Topaz is said to stimulate untapped talents and creative ideas. 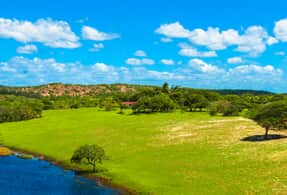