Zircon's name is either derived from the Arabic word zarkun meaning red or a combination of the ancient Persian words zar meaning gold and gun meaning color. Despite this name zircon actually occurs in a myriad of colors.

Cambodian Blue zircon is undoubtedly the most brilliant blue gemstone which has higher refractive index than any other blue gemstone. Zircon is a natural mineral zirconium silicate. Zircon's brilliant luster fire and bright hues make it an enjoyable addition to any jewelry collection.

Blue zircon has some unique properties that make it very popular with gemstone aficionados. Not only does zircon have outstanding brilliance but it also has very strong dispersion or fire the tendency to split white light into the spectral colors. Zircon also has very pronounced birefringence or double refractivity where the difference between the two refractive indices is unusually high. This can be often observed with the naked eye when you look down through the table of a cut zircon; you will observe facet doubling that makes the facet edges looked blurred.

• Zircon has been found in some of the most ancient archaeological sites.

• Zircon is first mentioned in the ancient Indian tale of the Kalpa tree. Described by Hindu poets as the ultimate gift to the gods the bright glowing tree was bejeweled with leaves of zircon.

• The gemstone of fiery starlight Jewish legends say that zircon was the name of the guardian angel sent to watch over Adam and Eve in the Garden of Eden.

• Zircon is mentioned in the Bible (using the name jacinth for its red variety) as being one of the stones of fire (Ezekiel 28:13"16) that were given to Moses and set in the breastplate of Aaron (Exodus 28:15"30).

• Zircon is also one of the twelve gemstones set in the foundations of the city walls of Jerusalem (Revelations 21:19) and associated with the Apostle Simon.

• Traditionally zircon is a gem of purity and innocence. Zircon is believed to promote inner peace while providing the wearer with wisdom honor and riches. Legend also has it that a zircon's loss of luster is a warning of imminent danger.

• Zircon's popularity grew dramatically in the 16th century when Italian artisans featured the gem in jewelry designs. In the 1880's blue zircon was widely used in Victorian jewelry.

Cambodia is the world's premiere source for gorgeous blue zircon. Remote pristine and stunningly beautiful Ratanakiri province is the major center for Cambodian zircon yielding most of the world's finest blue zircon. We source all our Blue Zircon from Bo Kheo mines in Cambodia. 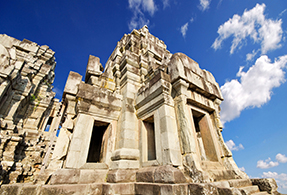