The world never seems to cease in providing collectors amazing geological treasures, and Greenland Nuummite is no exception! A rare gemstone, this iridescent orhtoamphibole only exists in the area around Nuuk, Greenland. Carefully regulated, only a small portion becomes available every year outside of Greenland.

What Color is Nuummite?

Greenland Nuummite belongs to only a small group of iridescent gemstones. A mixture of anthophyllite and gedrite, the rock possesses an earthy dark brown to black bodycolor, like freshly tilled soil. Sparkling against this backdrop is a tableau of shimmering colors, including red, gold, green, and blue. When expertly cut, this stone takes on a breathtaking life of its own.

The composition of the rock produces crystals that arrange in peculiar ways rarely seen elsewhere. The unique geographic location of the island country creates the rare conditions required in forming this stone. Providing Greenland Nuummite its distinctive appearance, the crystals align together like bundles of grain. This allows light to pass through, playing just below the surface of the stone in pops of intense color. Only the best lapidarists have the skill, patience, and expertise to tease out the inner glow of each stone.

Even with this level of skill, polished Nuummite rarely displays the full spectrum of color possible. Typically, polished specimens display either blue-green or golden-yellow iridescence. The formation and arrangement of the stone’s crystals also have an impact. Smaller crystals in tight groups often present a broader range of color. As the crystals grow larger, they more frequently display only yellow or red in favor of any other color.

The majority of Greenland Nuummite favors shaping into cabochons. The structure of the material makes faceting a risky and challenging prospect. Besides, the best colors form in the stone when it’s developed into round or oval shapes.

Nuummite ranks six on the Mohs scale of hardness. While polishing creates the desirable iridescence within the gemstone, cutters must take great care! Potential cabochons must be formed at the correct angle for the best display of the stone’s internal sparkle. This requires frequent quality checks to make sure that the roughly shaped stone is in its best potential alignment.

Who Should Wear Nuummite?

Anyone who appreciates rare and unusual gemstones, or those with uncommon properties, will enjoy Nuummite. Few other stones display fascinating iridescent effects. Collectors who already appreciate gems like labradorite, moonstone and opal will be drawn in by the mystery that Nuummite presents. Consider Nuummite jewelry if you already enjoy gemstones such as tiger’s eye, goldflake feldspar, or Sable Ethiopian Welo opal. 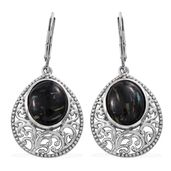 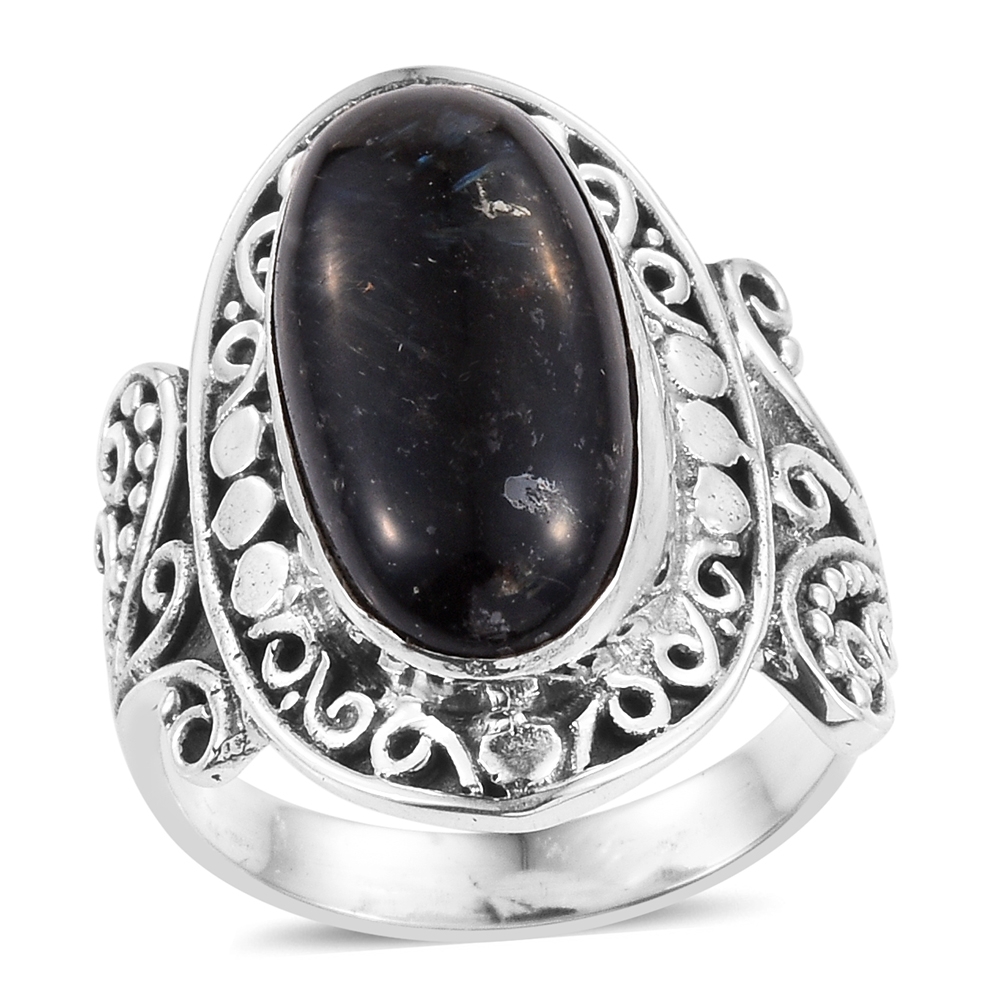 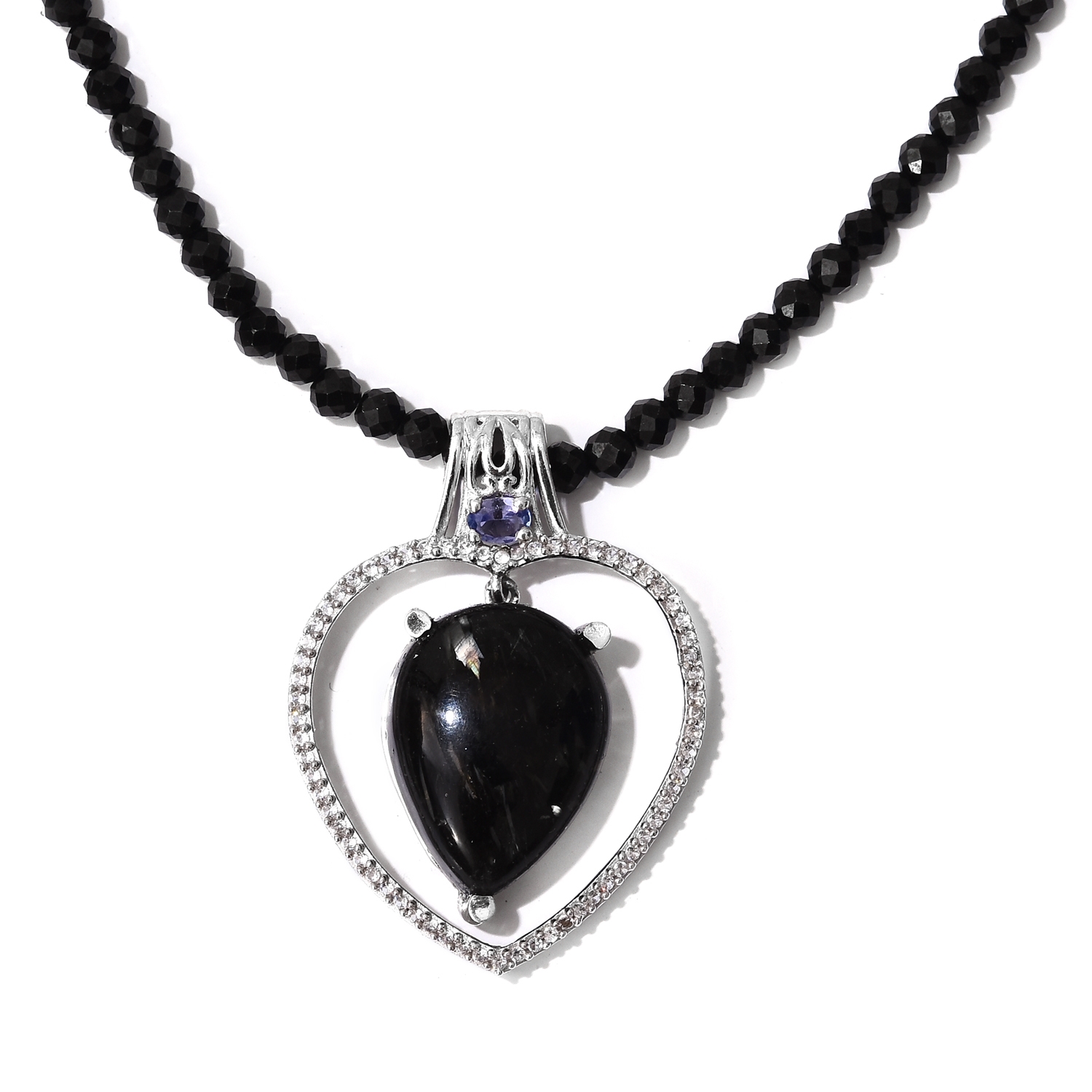 Shop for Greenland Nuummite Necklaces & Pendants »
Back to Top

When was Nuummite Discovered?

• Nuummite was officially discovered in the early 1980s. Once it was established that the original rough was suitable for gem use, plans for launching the stone in Greenland and Denmark were established. By the late 80s, Nuummite became available worldwide.

• However, the mineralogist K.L. Giesecke was known to have collected some extremely similar material from the original Nuuk location as early as 1810. Later analysis of the rock showed iridescent qualities, noted by researcher O.B. Bøggild in 1905. This provides a strong argument that the gemstone’s discovery occurred much, much earlier.

Like Minas Gerais, Brazil, Greenland is an important hotbed of geologic activity, home to some of the most unusual formations and rare minerals known today. Shop LC sources Nuummite from this remote island country. This rare stone is only available at eight locations within 30 miles of Nuuk. The iridescent orhtoamphibole rock dates back to the Precambrian age, making it one of the oldest known minerals – over three billion years old! 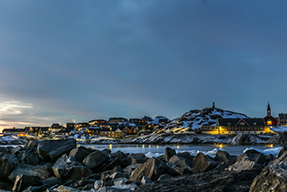 How is Nuummite Mined?

To mine Nuummite, it first must be prospected. There’s no telling where the iridescent gem will be found, as the material is identical to normal rock at first glance. Prospectors will survey the land, looking for areas where the Earth would have folded over itself during natural geological processes. The best material tends to form here. Blasting of likely spots easily exposes raw stone.

When found, Greenland Nuummite tends to occur in thin ribbon-like bands within a seam. In the field, the potential material is cut with a diamond saw, separating any potential rough from the host rock. Stone extraction occurs with mechanized equipment due to the treacherous nature of the rocky terrain. Further limiting production is the temperature. Mining occurs only between July to August due to the harsh climate and permafrost encountered in the area.

The current supply of Greenland Nuummite is unknown. There has simply been no reliable way for surveyors to estimate the remaining supply. The outlook for more gem-quality material is promising, however. Island deposits of the stone have been detected south of Nuuk, and samples have been gathered for analysis. Only time will tell how long this supply of ancient rock will last.